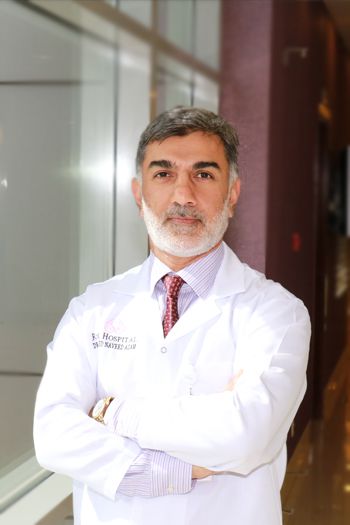 Dr. Azam graduated from Bangalore Medical College and Research Institute, India, and pursued his postgraduate education and training in Gastroenterology in the UK. He has completed his postgraduate training in Internal Medicine at University Hospitals in Liverpool and Manchester, UK. He received the MRCP (UK) with distinction in 2003 and proceeded to do a five-year super specialty training in Gastroenterology and Hepatology at the University Hospitals of Leicester, UK.

He also did a Fellowship in Advanced GI Endoscopy at Kettering General Hospital, UK, before getting his CCST in Gastroenterology. Furthermore, he was appointed as Consultant Gastroenterologist at Kettering General Hospital, Northamptonshire, UK, in 2010, and continued in this post till 2013. He was the lead physician for the Inflammatory Bowel Disease Service and the Endoscopy training lead at the hospital besides being an Educational Supervisor for several specialty trainees in the deanery. The doctor received the prestigious FRCP (Edin) in 2012, is a member of the British Society of Gastroenterology and has served as faculty on the National Endoscopy Training Courses in the UK.

Dr. Azam has also worked for six years as Consultant Gastroenterologist at Narayana Health and Columbia Asia Hospitals in Bangalore, India. His expertise is in treating patients with all types of digestive and liver disorders. He provides the full range of GI Endoscopy service including Gastroscopy, Colonoscopy and ERCP and has extensive experience in highly demanding interventions as treating acute gastrointestinal bleeding, removing polyps, EMR, banding, stent insertion, feeding tube placements, dilatation procedures and many more.

His areas of specialization include: